This is nearly 15 years in the making. I designed numerous Lego Arwings throughout history once I fell in love with Star Fox for the Super Nintendo way back in the day. Right before Star Fox 64 came out I made the Lego Arwing Mk-I, which was very short lived.

Soon after Star Fox 64 came out, I built the Lego Arwing Mk-II in 1997 which is one of the few Lego ships that survived the destruction of my Lego base back in 2000. This is probably the final version of my Lego Arwing and I created it as a specification layout; I’m still getting the pieces together to create it as a physical model as I would ultimately love to make it one day.

This one is heavily based on the Arwing II design from Star Fox Command. 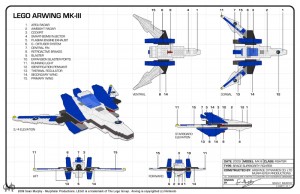