Well going backwards in my Arwing legacy, here is Lego Arwing Mk-II as a specification layout. This one I created very soon after Star Fox 64 came out back in 1997, and it’s influenced by Star Fox 64 as well as Star Fox for the Super Nintendo.

As stated in my previous post, this one I still have constructed on my bookshelf even after all of these years. I made a few more using some hand-drawn step-by-step guides to build this, and those hand-drawn instructions I drew back in 1998. The only other survivor of the Mk-II series is a black colorized one that sits right next to the original one. It’s a semi-reference to a character only seen in the comic, Fara Phoenix, as she flew a Black Arwing at first until it was destroyed (then it was pink). 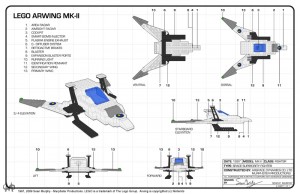