So a friend of mine started to play The Legend of Zelda: A Link to the Past, and we were discussing locations on one of the maps and I mentioned that I was having trouble thinking of a certain spot because I didn’t have my map in front of me. Which then came up the question of did I draw them. I did literally in 1996 way before I had a PC/Photoshop, or the internet; just me, the SNES and a copy of A Link to the Past on the map screen on a 19″ CRT television. Each one took about 2-3 hours to do so the poor TV and SNES got a workout for just showing off 2 screens basically. The interesting part is they both were drawn on small pieces of notepaper and taped together, and strangely they’re almost identical in size. Both have been laminated by my dad a few days after they were completed. 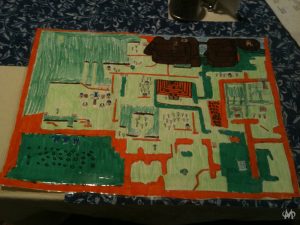 Ever since I did the Vana’Diel map, I’ve been wanting to do more maps; maybe one day they’ll get the remake that they truly deserve.