Back in 2000 I discovered making compilation discs and began working on several of them. Most of which were pretty awful, but I did make a niche into one style that was J-Pop music from rather popular Animes that I either had seen or just liked the tunes from. The first one was called “Sean’s Music” with “Anime Style!” as the sub-title. The first one ended up working out so well that it spun off into 15 different albums sort to speak. The artwork evolved over time, but this was back before I understood resolution, so printing them looked terrible since they were all at 72ppi instead of 300+ppi, and that all finally ended in 2005.

Around 2003, 6 months after I started college, I got into some small debates about video game music and how it was good music to listen to just as much as everything else. So from the Anime Style series, I spun that off into “Anime Style” with the sub-title “Vid Style.” Short for Video Game Style which had tracks from several popular, and not-so-well known at the time, video games. 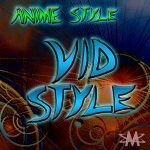 The original cover that started it all.

Apparently this became rather popular amongst friends, and even friends of friends, and friends that I hadn’t talked to in years by this point! I was rather surprised by this, so I set off to make a sequel to it several months later from the music that I didn’t pick to be on this album in the first place. When that came out, I dropped the “Anime Style” main title and just named it “Vid Style 2” using the similar awfully gaudy hand-drawn logo that I did on the first album cover. Nearly as popular as the first one, and even a number of the same friends began to give feedback on what to do and not to do next (if there was a next at the time). 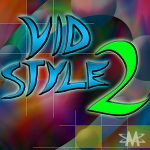 So some time passed, and I got that urge to make a 3rd one many months later. After carefully going through remixes and original songs, the 3rd one came out. It wasn’t that great, and the flow of it just wasn’t there like the first two. I was planning on making that the last one as I’d figure that was it: a nice trilogy and that would be the end of it. However, that totally didn’t happen.

Mid 2005, nearly a year after making Vid Style 3, I once again started to work on Vid Style 4. I don’t recall what possessed me to make another one, but since so much time had passed from the 3rd one, that there was a good chance that it could sound different. Boy, did it! Reverting to more actual pieces from games instead of remixes really changed the overall tone of the album to something much more pleasing. This became the best one to date at the time, but I wouldn’t find this out for several years though. The larger gaps seemed to make them better, and so I rested upon the completion of the fourth one and didn’t think about it until more time passed. Another year later, I began to work on Vid Style 5 using the same parameters that I did for 4; the outcome was much worse, THE worst in fact to date of the series. I decided to officially end the series after this.

Mid 2008, nearly 3 years after I finished Vid Style 5, I had acquired a number of really nice game pieces thanks to friends and buying a number of soundtracks (yes, I acquired ALL of this music legally!) and was wondering what the heck to do with them. So I brought the series out of retirement and created Vid Style 6, which redeemed the series big time using revised parameters than that of Vid Style 4 & 5. Around the same time, I redid the artwork and playlist for Vid Style 1 and the artwork for Vid Style 2 to have them match the series’ consistent “style” a bit better but keeping to their original designs… well that’s a lie – Vid Style 2’s artwork got overhauled. I already began to think about Vid Style 7, as there was no doubt in my mind that I would continue the series now.

Late 2011, nearly another 3 years after Vid Style 6, I created Vid Style 7 thanks to a bit of help from friends for suggestions as to what I needed to add or should add to this one. Without (almost) breaking the same parameters that I used for Vid Style 6, I finished up 7 and it topped Vid Style 4 for best album, or at least I feel like it did (although everyone seems to agree that the first Vid Style is still the best). So there was a lull and I am already planning the 8th installment of the series, but not before I finished this one up with a collaboration disc that had everything I’ve done to date. I went back and cleaned up EVERY file, tag, album art, and so on so it was MP3 player ready at this point and even included a whole new album to wrap up some of the loose ends that had been created throughout the series. This album basically had songs that never made the final cut in the first place; strangely this album came out fairly decent and it ultimately got the subtitle “The Lost Tracks.” In doing so, it broke every single parameter rule that I had set out to withhold since Vid Style 6.

So with all of the albums cleaned up, finalized, edited and revised (Vid Style 2 & 3 got new tracks, and Vid Style 5 got revised tracks), I went to put together what ultimately became “The Mega Collection” spoofing an old Sega Genesis style box-art since this was being made for a DVD case. The artwork became something amusingly obscure, but it worked and I feel it combines all of the albums nicely into one package. A booklet was made as well to list out every single song and where it originally came from. This concludes “The First Quarter” as the collaboration disc was supposed to be called way back when I just finished Vid Style 5 – thankfully that never came to pass until now.

Now, I DO NOT make these and sell them, I do them as a hobby and this is the artwork that I created (or spoofed) to give it that nice finished touch. I didn’t get them by ‘shady’ means; I went and got the music by either purchasing the soundtracks, or by getting them from OCRemix.org, or from the actual game companies’ website. So the designs for the albums are mine, but the music itself I do not claim; don’t come beat me up!