This project was a heck of a undertaking spanning nearly three months of working on it on and off, while concluding my retirement from playing Final Fantasy XI. The origination for this project was inspired by old world map artwork, and I really wanted to have a poster-sized map piece on display. I picked Vana’Diel because I really like the world, and I have become pretty familiar with it over the past four years of walking through this living world encountering the climates, geography, environments, local creatures, cities, and practically everything else this game throws at the player as they go for the goal of level 75. Vana’Diel is gorgeous to say the least; SquareEnix did a fantastic job with it feeling like a place one could visit, even with its fantasy feel.

This project had a lot of challenges, starting with how the heck I was going to begin. I snagged both overall world maps: The Middle Lands, and Arajidah Continent, then laid them out appropriately “accurate” in distance between the two by the Gugru Blue Ocean by means of the ferry map that shows players the path of travel it is going to take. I also made a note of the small islands one can see on the ferry that are in the Gugru Blue Ocean.

From there, it was HOURS and HOURS of tracing in Illustrator for the continent outlines. I don’t have a tablet so it was me, the pen tool, some music, and caffeine as I slowly was driven mad by every single click of the mouse. This took about 2 months to accomplish while taking breaks every now and then to either play FFXI, or romp through a classic Super Nintendo game on Saturday evenings. Around the time I was about to bid farewell to the game, I had completed the outlining of the entire world and added in the region borders. I continued working on the map, even though I was leaving the game soon, because even though I was retiring from FFXI, I still wanted to complete the project. I love the world, so I wanted to see this through.

The detail phase was a ton of fun! Placing in the mountain ranges, forests, cities, areas, zones, dungeons, and names of locations was a nice change of pace from the tediousness of the outlining portion. Thanks to experiencing the game for so long, I was able to recreate where things roughly would be if one was to look just at the over world map, instead of the area sub-maps. Now, to be fair I did reference a handful of those as well for placement of exact things, or items that I wasn’t exactly certain of (like those islands in Gugru Blue Ocean). This didn’t take nearly as long, and I did continue to finesse little details here in there. I did add in liberties from reading some lore to make sure what was not explorable, at least was represented as correctly as possible. I also added in the Shadowreign zones as well like Grauberg to show where they would have been in the present.

The final phase was to colorize it, and add in the final touches. This was kind of a challenge as my RAM was not a happy camper competing with both Illustrator and Photoshop. I ended up converting each layer from Illustrator into a file itself, and loading all of them separately into Photoshop for reassembly. It worked out pretty well, and I continued to begin the coloring phase from there. The geographical coloring went pretty swift; although I think it’s a tad too fine of a line going from grassy areas to rocky, and vise-versa. Possible clean-up revisit project in the future perhaps when I have better tools at my disposal. The final touches were adding some subtle effects, making the labels read more clear, and a little bit of texture to help it not look so “flat.”

When it all done, the proportions were rather too unique for a standard poster size, so I added a nice dark blue border, then artificially created a large black border, titled it, and got it all set up as a 24″ x 36″ poster! 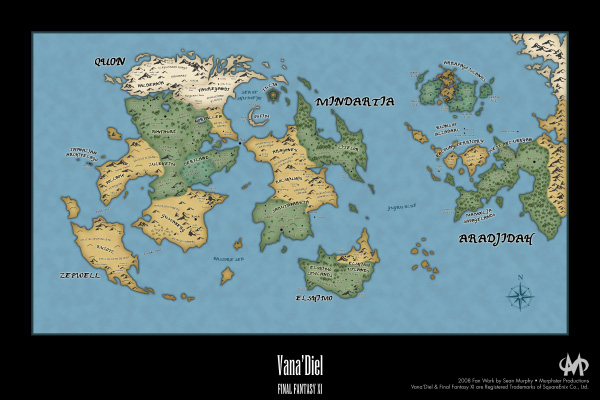 COMPLETED!! Fair warning all, this full-scale is pretty big!

Overall, I am very happy with how this came out, and that I was able to see it through to the end! Whenever I work on a new world map, or come back to this one though, I would like to have a Wacom Tablet to make the outlining process far easier and quicker. It did get printed out too, and is happily hanging in my office!