Okay well then, this piece has to be considered a milestone in practically every skill I have acquired up to this point in my life and career.

Little bit of back story for this piece: a couple of years ago, I was talking to one of my good friends about Steampunk, and some of her universe’s story elements. One of them was the airship that her ragtag crew and herself made use of while traveling the world. We talked about certain specifics that were in the ship, and some referencing ideas to get some concepts moving. Well, everyone got busy for quite some time after that talk, but I did store away some very crude sketches for when I could sit down and iron out a final draft schematic. That moment happened a couple of years later and I began to plan the project, and then present it to her as a gift!

Initially the big question was exactly how to begin, so I examined some of my really rough sketches for a starting point. They were too similar to other fantasy airships that I was aware of, so after some altercations, I had a second draft to work from to draw out the final draft on grid paper. A little over a week passed, and I had a complete final draft of all the sides, and each deck detailed out for the entire airship. I was ready to scan in the documents and begin the next phase of the project.

Now, if you recall from Vana’Diel and The World Map, utilizing a Wacom Tablet for the latter of the two really helped speed things up. This was no different, and all of the outlining in Illustrator went vastly faster than ever before. It still took a bit of time, but for other reasons like work and life obligations. I want to say it took about a month, but I think it was more like three weeks to get the entire schematic outlined and laid out the way I wanted it to in Illustrator, even with some base colors, before concluding its time in Illustrator before moving on over to Photoshop. Since I had upgraded my system from the previous two projects, getting the file into Photoshop was a breeze.

Coloring this time was a tad more of a challenge, with a lot more details to consider. Thanks to my tablet, getting started wasn’t too bad and I ended up creating a set of layers for the coloring of the exterior of the airship, and then a set for the decks to help make things easier if anything went astray (and it did!) Getting the scheme was trial and error, but when I got that nailed down, it really worked out pretty darn well (she really likes pink!); so from there, it was just using painting techniques to get the shades and highlights the way I wanted to for the entire exterior of the airship. The interior had a base color, and then some effects to help “de-flatten” those with shades and highlights, similarly to what I did on The World Map. After a couple of weeks of tweaking and coloring, all that was left was the final layouts, and then some modifiers to transform it into a poster!

The final phase was two parts: make it look more like a worn paper, and then adjust the sizing to be a standard poster dimension. The first part of that took some time to get things to look just right, using blending layers and layer effects along with some texturing to get the feel of what I wanted. This was surprisingly more difficult than I first imagined, but it finally did work out very well. To create the poster effect, I just utilized some stuff I did previously, but added a gold/bronze pattern to the border with a much less thick dark border. This time the dark border was intentional to give it a negative space to separate the border of the poster frame and the artwork, and this seemed to work out fairly well. The final product was one heck of an airship schematic! 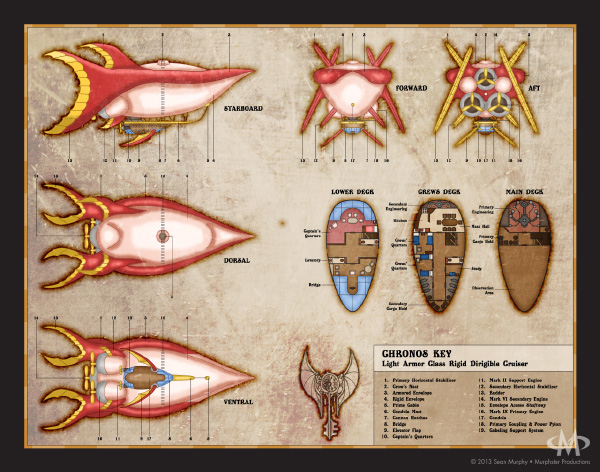 Soon thereafter, I got it printed at a local print place, framed it, and gave it to her as a gift with time to spare! The reaction was priceless, and I think that was far more rewarding than any skill-ups I had acquired doing the project itself.