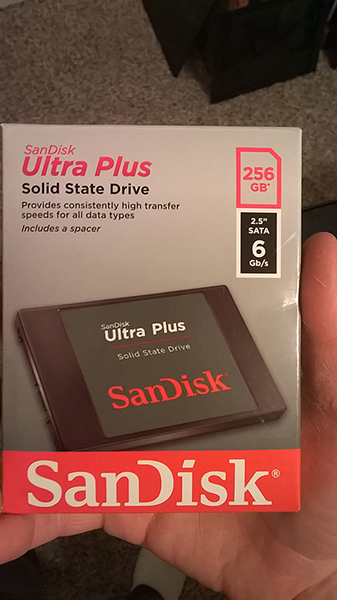 This is the Hard Drive that I picked out. It’s not a typical Hard Drive, but a Solid State Drive (SSD). The major difference between a typical hard drive and a solid state drive is that a standard hard drive is multiple platters that spin on a mechanical motor and has an arm that reads/writes the data. The best way to visualize what it looks like is a record player. 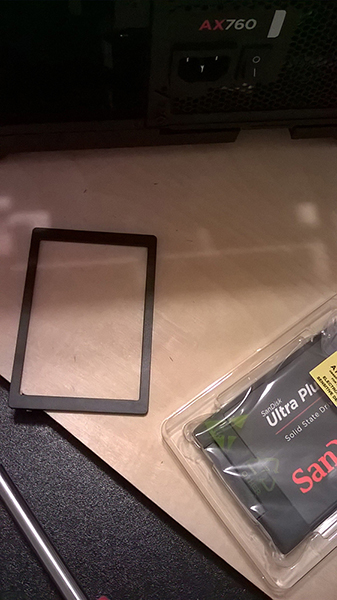 I just wanted to point this little frame out off to the left. Depending on how a SSD is installed, this might have to be applied onto the SSD itself before being installed into the PC to keep it from rattling around. Notebooks and some Next Unit of Computing (NUC) computers. However, for this Chassis, I didn’t need to use it. 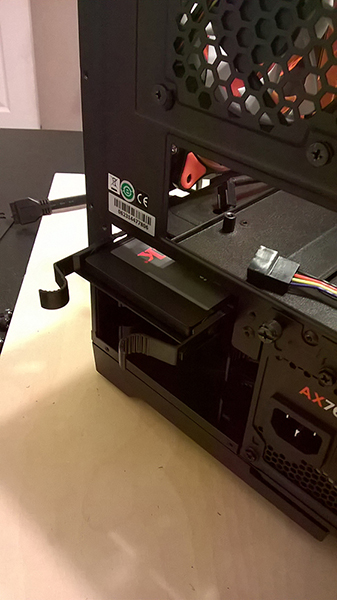 Here’s the SSD being installed. This Corsair Chassis had a built-in SSD (up to 2), and HDD (up to 2) racks in this little corner. This omits having to either use 3rd party caddies and/or messing around with screwing them into the caddies. A lot of PC Cases still utilize screws as the main installation method. A number of higher-grade PC cases utilize something called a “Tool-less Installation” method, kind of like this chassis does. 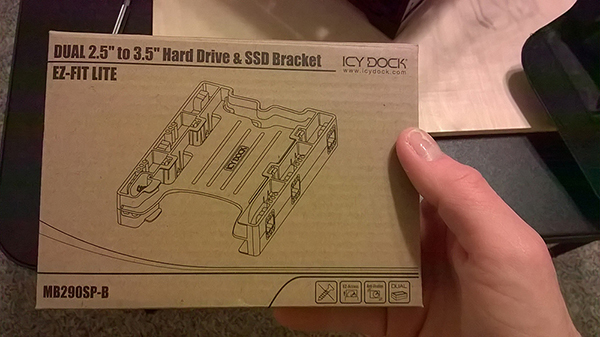 Figure 20: An Alternative Method to installing an SSD drive into a PC.

This is an example of a 3.5″ to a 2.5″ converter caddie. A standard HDD is 3.5″ and an SSD is 2.5″, so what this does is converts a HDD slot into two SSD slots without the use of tools for installing the SSD. Depending upon one’s chassis depends if this converter would have to either be tool-less installed or with screws. I use this one in my main PC and it works superbly well. Figure 21: Back Side looking close to Complete!

There’s the near-completed ports on the back of the PC! What’s left in the middle is where the Motherboard is to be placed. This is the DVD-RW Drive I picked out; there’s really nothing special about this. It burns DVDs and CDs, as well as read/writes them. Any brand would work as long as it reads/writes at the very minimum.

Rotating back to the front of the PC, I punched out where the DVD-RW Drive is to be installed at already, and it just goes right in that spot. 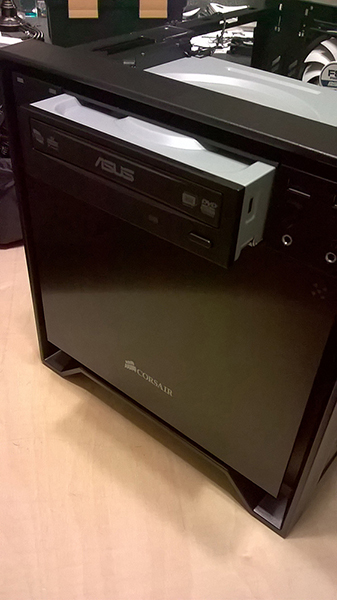 Just slip that drive right in there! Usually it has to be inserted from the front into the PC Case. That’s not a couple of lines for the internet to enjoy, don’t judge me! 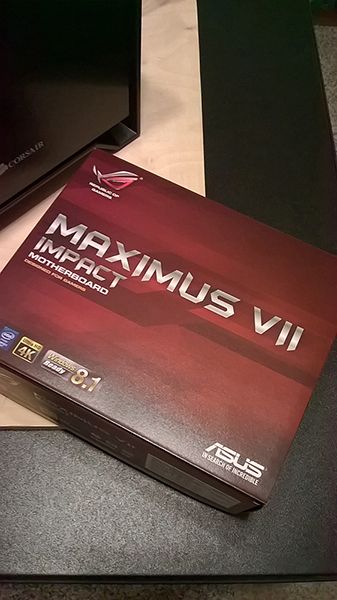 This is the motherboard that I picked; this is the main board in all computers that exist, and they can widely vary in size depending on their form factor. The most common types of form factors these days are ATX, Micro ATX, Mini ATX, and ITX. The form factor really depends upon it’s usage; the ATX usually has far more options than the other types, but in terms of picking a type, that all really comes down to personal preference on what it is being used for ultimately. I usually go with an ATX board size, but the smaller sizes like this ITX are beginning to gain some of the nice features of a full ATX.

This is where Intel and AMD boards vary; if one is building an Intel CPU-based system, make sure it specifies Intel on it and that the socket type matches up with the CPU’s. What I mean with the socket number is typically on both the CPU and the motherboard, there will be a number starting with LG and then 3-4 digits. For example, this board is a LG1150 socket type so the CPU is also a LG1150 processor to fit correctly.

AMD is the exact same thing, just make sure they both state AMD and the socket type are both the same and it’ll be smooth sailing.

As for brand, I’m a huge fan of ASUS brand motherboards as they tend to be one of the, if not the, best brand out there to purchase for a motherboard. ABit was an extremely good motherboard maker back in the Pentium 4 days, but they have long been out of that industry since then unfortunately. Gigabyte is a very good Motherboard maker as well, and I’ve built a nice Hackintosh with their motherboard.

This is their ITX line of boards, and it’s got some potent bells and whistles, that’s for sure! A lot of the bells and whistles are for OCer’s and not for regular builders, so if one is not OC’ing, then ignore some if not all of those things. This ITX allowed for some higher RAM speeds and that is the absolute primary reason I picked it, but more on RAM speeds later. 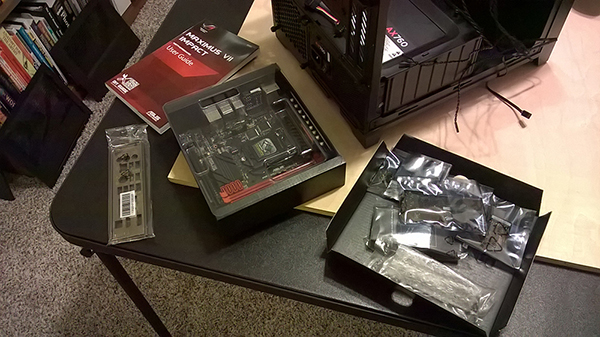 Okay, here we go. Big deep breath and this is where things have to be taken slowly. 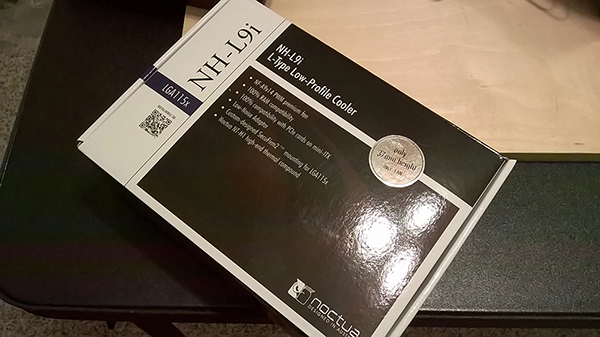 Now, this is a custom CPU cooler. Most CPU’s come with a stock cooler, and that does a pretty decent job of keeping the CPU sufficiently cool. Since this was a small form factor, and I had never built one before, I wanted to make sure it stayed very cool.

Noctua is one of the highest rated CPU coolers on the market. They cost a little bit of money, but it is very worth it. If one’s CPU does not come with a cooler (the very high-end ones will not), then this is the cooler I would recommend if not going with liquid cooling. This is their “compact” version of their standard version, and it definitely does almost as well as their bigger counterpart, that would not fit into this case.

Custom coolers, in general, tend to be a little tricky to install. Take some time, keep a calm pace while installing a custom cooler, and everything will go just fine.

Also, another little note, custom coolers tend to have a socket range for their compatibility. As long as it states somewhere in the specifications and/or on the box that it will work with the socket that the motherboard is, then it will be fine. This Noctua CPU Cooler, for example, fits LG1150, LG1155, and LG1156 Intel Sockets.

Did I mention go slow? Because, seriously, go slow. 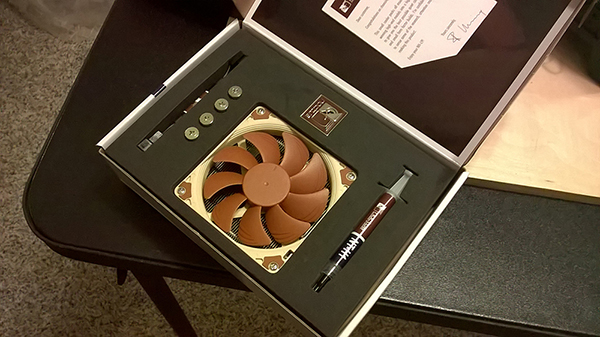 They really know how to package a cooling system; no one else does it this sexy. 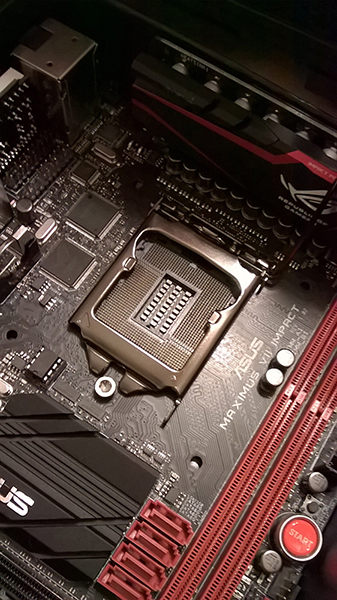 This is the CPU socket completely opened without the CPU installed; they always come with a black plastic “shield” to protect all of those pins, just lift up the lever, which will also lift up the bracket, to the right and put that to the side; DO NOT DISCARD IT, EVER! I say that because if one decides to resell the motherboard, or upgrade the board and want this to be stored safely, that will need to be returned to the socket for shielding it. Take note of the arrow in the lower left corner of the lock bracket!!

I MUST TAKE THIS MOMENT TO REMIND EVERYONE TO HAVE ABSOLUTELY NO STATIC ELECTRICITY, AND DO NOT TOUCH THOSE PINS WITH BARE HANDS! IT WILL CAUSE A VERY BAD DAY TO BE HAD! 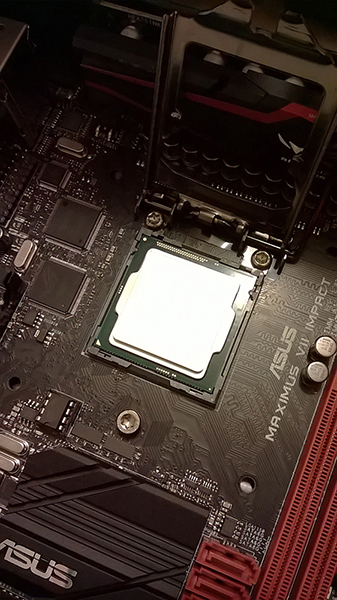 Figure 30: CPU has been Placed.

This is the CPU in place without the lock engaged. Notice in the lower left corner that arrow on the CPU Chip’s board aligns with the arrow on the lock bracket! THIS IS IMPORTANT! The CPU should rest nicely in place, as there’s several other notches on it that will only line up properly with the socket when inserted correctly. The arrow is a huge indicator, though. 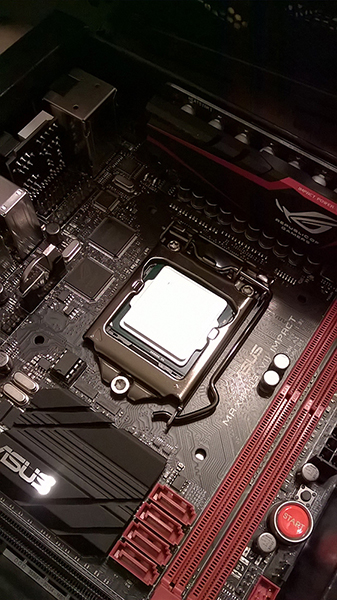 Alright now, quadruple check to make sure the CPU is properly in place before executing the next step.

Begin by carefully flopping down the silver bracket on top of the CPU and underneath the screw in the middle there. Now, slowly but firmly pull down on the lever and place it under the lock-hook like it was prior to the plastic shield being removed. This will cause A LOT of tension and some strange noises, this is perfectly normal, just keep going until it’s locked snugly underneath that hook like the photo above! 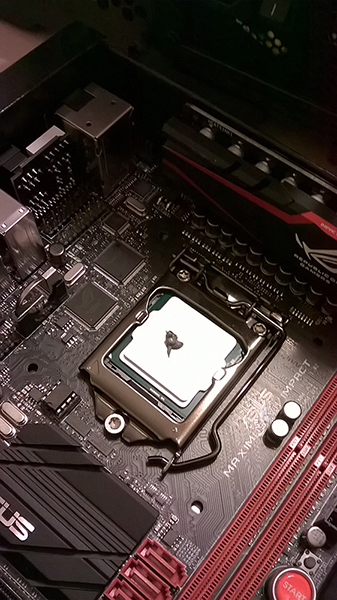 This is Thermal Grease, which is required for a CPU to operate properly. One only needs about a pea sized droplet of thermal grease to be applied to the top/center of a CPU for it to cool properly. What this does is allows for the heat from the CPU to be transferred effectively to the cooler that is mounted on top of the CPU.

Thermal grease comes in a few ways, but the most common is a reusable syringe that just “injects” atop the CPU very slowly. This stuff won’t come flying out, unless one applies an absurd amount of pressure to the syringe. Antec, Arctic Silver, and Noctua’s brand of thermal grease are among the best choices. I’m using the one that came with the Noctua in this instance. 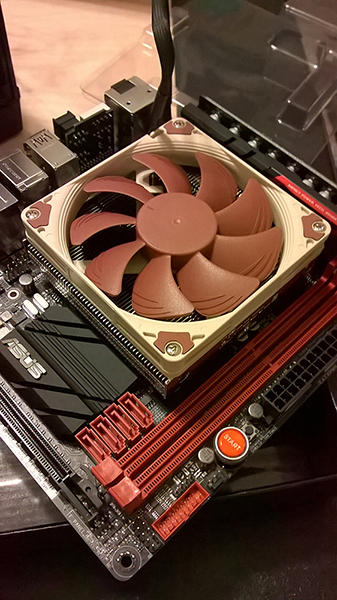 Here’s the Noctua mounted in place. I couldn’t successfully get photos of this installation. Basically just carefully follow the directions, even if it’s a stock cooler, and it will go swell. I must remind everyone at this time to utilize the diagonal opposite corner strategy for anchoring down the CPU cooler properly! For the Fan’s Power, on the motherboard there will be a 4-pin connector that has a label printed next to it that will say something like “CPU_FAN.” Just “plug” the connector into that spot and it’s good to go! The motherboard manual will have the spot noted as well if it is hard to spot on the motherboard itself. Normally it’s pretty close to the CPU socket. This is the Motherboard’s back plate, and it’s a very nice back plate because the side hugging the board is foam padded. Some are not, and if a board’s panel is not padded, then just be careful to not damage the board upon installing it into the chassis. To install this guy, just push it firmly into place from the inside of the case. THIS HAS TO BE INSTALLED PRIOR TO THE MOTHERBOARD FROM THE INSIDE OF THE CHASSIS! Figure 35: Back Plate in Place.

There’s the back plate installed successfully! There’s the motherboard successfully installed! If the bracket has foam, then there could be some massive resistance on the board when trying to screw it into the motherboard plate. Just take the time to slowly screw in one at a time. I tend to start at the end opposite of the bracket first, then work my way towards the bracket. This seems to make the process far easier.

From here till completion is all down hill!