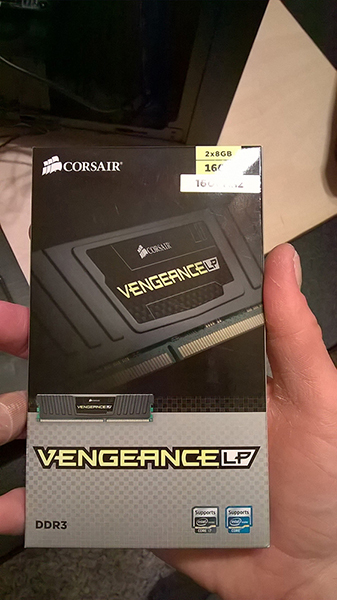 This is the RAM I picked out, it’s really just coincidental that a number of parts are Corsair. I have had good luck with them, so I keep going back to them. There are several good RAM brands out there; my main uses Kingston Hyper X RAM, but there’s also G. Skill too.

Now, there are a vast amount of different RAM speeds, and numbers out there to mess with along with all of them varying in price. What needs to be considered is the following when acquiring RAM:

Generally speaking about balancing the channels, it is always wise to balance the channels so they match no matter what, but that does not necessarily mean all of the channels have to match.

Let’s say I have a Two Dual Channel (4 slots) on the Motherboard, and the board can handle a maximum amount of RAM at 32GB with speeds ranging from 1033MHz all the way up to 3100MHz of DDR3 type memory. I decide to only fill one Dual Channel with only 8GBs of 1600MHz RAM, which would be two 4GB sticks of matching CAS Latency. This leaves the other Dual Channel completely left open for future expansion.

I come back after some time and decide to add two more sticks to the remaining Dual Channel, but this time ramping it up to 16GB with speeds of 2400MHz, which would be two 8GB sticks of matching CAS Latency. That brings the final total up to 24GB of usable RAM across both channels for the system to utilize. The DDR3 part is the only thing that absolutely cannot change and has to be consistent, and the notches in the RAM slots on the motherboard will make it so that one cannot place non-compatible RAM into those slots (i.e. cannot install DDR2 into a DDR3 slot, and vice-versa).

I personally do not mess around with the CAS Latency or the higher speeds; I tend to go for the “Middle” level of RAM, and right now that seems to be 1600MHz. I do max out what the motherboard can handle, which allows for the PC to have more memory to work with. Some say this is overkill, but depending upon what one wants to do with the system, that may not necessarily be accurate. I would definitely recommend 8GBs as a minimum amount of RAM as of current technology standards. Memory commonly comes in what are called “Channel Kits,” to help making the installation of RAM easier. The RAM I got was a Dual Channel Kit, for example.

For newcomers to building, this is rather overwhelming, but it’s really not; so let’s move onto the build as an example. 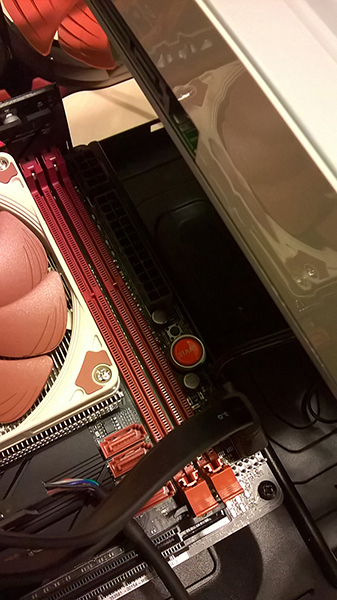 Here’s the RAM slots on the ITX Motherboard; there’s only two and it maxes out at 16GB, and this board allows for up to 3300MHz speeds. This is a single-dual channel on the board, which means that I should balance both of these slots equally. Just so happens that is what I’m going to do! Take note at the lower end of the channel those tabs; one has to pull those back before installing a RAM stick into the motherboard. Some motherboards, there are two of those: one on each end. Also, pay attention of the notch on the bottom of the RAM and make sure that matches up with the notch in the slot, or otherwise it will not install properly. The notches in the slot can be seen in the photo above.

Quick Reminder: RAM normally comes in channel kits to make things easier, so just snag a kit or as many as needed to achieve the wanted amount of memory. 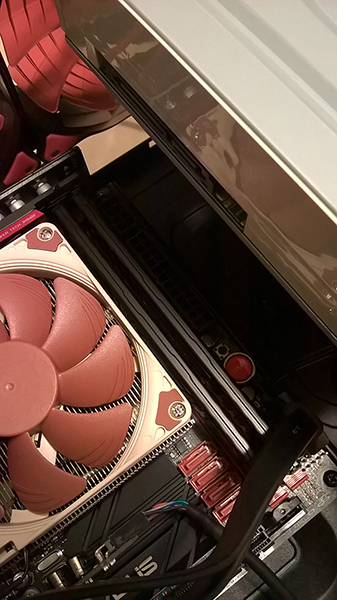 There’s the RAM installed! When the RAM is inserted into the slot properly, those tabs should automatically click back up into place as to hold the RAM in place on rounded notches at the ends of the sticks. 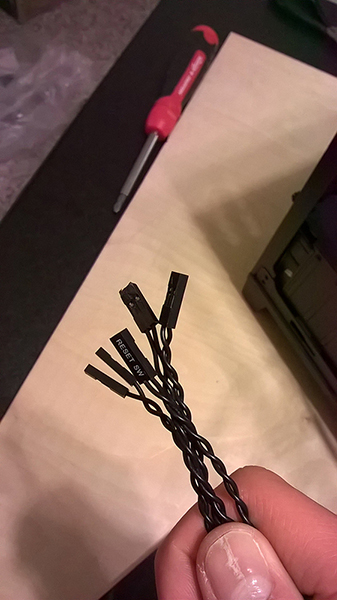 I’m pointing these things out because they’re a crucial, but annoying, step of every PC build. These are the front button cables. They go into little pins onto the motherboard and they control the power switch, reset switch, hard drive LED, and power LED. They also control the “DOS” audio speaker (the ‘beeps’ one hears when booting up PC’s equipped with it), but this is not required unless one wants to hear the beep every time and most cases do not come with one these days either. They can be handy for diagnosing issues during boot-up. I like the beep, so I tend to install the little speaker that goes here. However, I did not install it in this build. 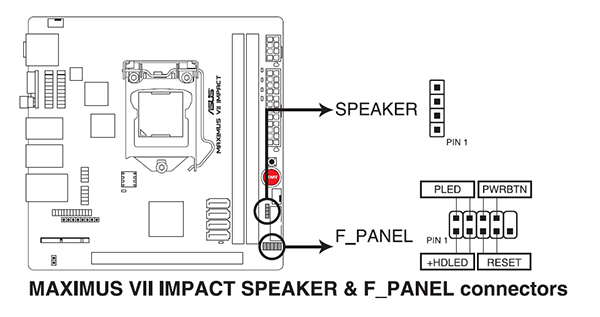 Figure 40a: Example of how the front cable connectors appear in the motherboard’s manual, note how the speakers in this scenario are actually off a little bit from the main bunch. This is not typical as they’re usually altogether.

To go about installing these things, sometimes the motherboard has it printed right at the pin marks to make it fairly straightforward, but if there is any doubt on how they are being connected, check the manual that came with the board; it’s usually very well labeled in the manual. Note the number 1 on the above manual example, that’s the positive (+) pin and/or or the triangular arrow beveled on the back of the connector cable. 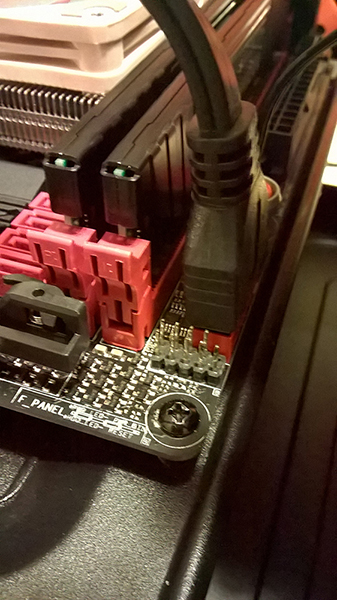 Figure 41: All of the Front Connectors Installed Properly.

Here’s where the pins are on the motherboard, and just to the lower left of the screw, is the printed label on how the jumpers are installed on those pins. This one was kind of hard to understand, so I ended up checking the manual on how they are to be installed. Once that is known, they just slide right down into place on the pins; there will be minimal resistance.

That large black connector right behind the pins is the USB 3.0 connector that is part of the front connector pins, it only goes in one way and acts just like plugging a standard plug into a wall socket would go. Sometimes they’re not good and can be loose; just continually pay attention to it as the build progresses. There’s no negative of it disconnecting during the build or not even using it if one does not. It’s just a nice feature to have if the PC chassis comes with it.

Again, pay attention to the (+) on either the board, or the manual and match that with the triangular arrow that will be on the back side of the connector cable, unless the front side specifies (+) or (-). If not sure, then one can just trial and error it; if it is wrong on boot-up, simply turn off the PC and flip the connector. If nothing is specified, then it’s should be safe to connect it either way; normally the white label on the connector cable will face outwards. 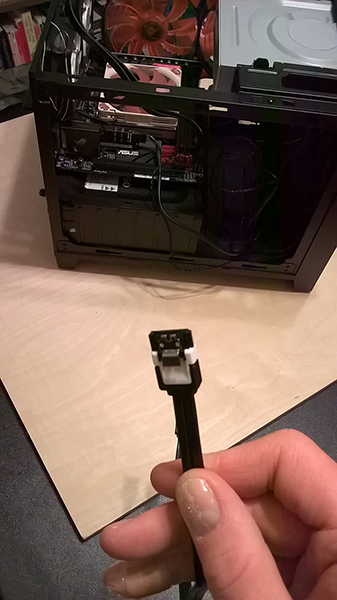 Let’s begin the connection process for all of the internal parts! This is a Serial ATA (SATA) cable. They come in different speeds that are typically labeled with a Roman Numeral. The higher the number, the faster the cable can handle. Ideally, the motherboard and the internal component match the speed of the cable. However, if it doesn’t or can’t, the nice thing is the faster cables support slower speeds as well.

There’s two types of connection types: the straight connector (above), and an angled connector. They both can be of benefit depending upon where in the case they are being utilized. From what I have gathered through experience, the angled connectors are useful on the hard & solid state drives, whereas these type are more useful on the optical drives. It really just depends on where things are located in the chassis though.

Note on how there’s a silver bracket-like latch in the middle of the connector. That locks the cable into the components. It’s not necessary, and there are plenty of cables that do not come with them, but it does tremendously help keep the cables from unintentionally coming loose and causing havoc on an active PC. 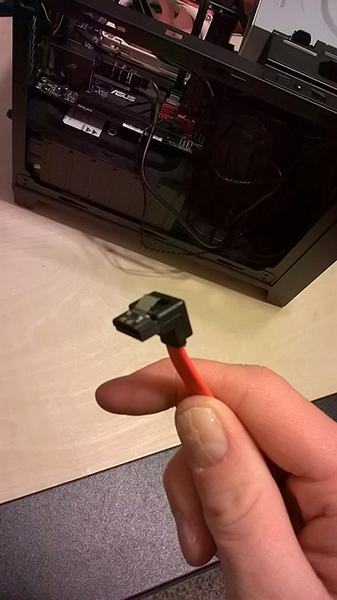 Example of an angled SATA connector; the other end of this is a straight connector, and that would got into the motherboard.

Figure 43a: Example of what the back side of a SATA Component looks like up close.

Alright, let’s finish this up!