Now, after the POST is successful, it will typically require first time access to the BIOS screen. This is what this motherboard’s BIOS looks like. Normally all that is required is to just go to where it says “Set Optimal Settings” like where my mouse cursor is pointing in the photo above, then save and exit the BIOS for it to reboot. This board was being a silly filly and I had to enable XMP for my RAM to be registered correctly. That’s not a common occurrence, but something to take heed of if the RAM is saying incorrect speeds in the BIOS’ status screen. Another item to check is the boot order; make sure whatever route the OS is being installed as, whether it’s an Optical Drive or USB, set that as the first boot item in the priority list with the Hard/Solid State Drive as the second item listed.

Once everything looks good on the status screen, and the boot order is all set up, save and exit. Now is the time to do an important test before even beginning the OS installation. 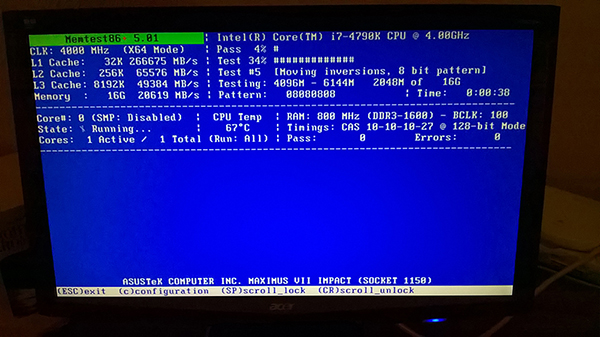 This screen is MemTest 86+ and it’s entire purpose is to stress test the RAM that was installed into the PC. I highly recommend to anyone that is building a PC, whether it is one’s first or fiftieth, run this program as it will save so much headache later on. The program can be loaded onto either a CD, or a USB boot drive. The PC will boot into this program immediately upon powering up or right after a restart if one set the boot order correctly to one of those two drives as the first boot.

It is recommended that this runs for around 24 hours to make sure there are no errors in the RAM. If there is even one error, replace the RAM with another one. There’s no way to repair bad RAM. Usually within the first hour or so errors will appear, so it’s not normally necessary to wait the entire 24 hours for an error to appear. Once one does, stop the test, replace the RAM, and then re-test again. Errors will appear in the bottom of the screen as entire red lines with an “ERROR” and then which slot on the motherboard it came from. If it was a Channel Kit, then just pull both out, return/replace the said kit from where it was purchased. If it was a couple of random sticks one had lying around, and the error doesn’t make sense, take out all the RAM but one stick and then single-stick test each one for an error. It’s tedious, but it is so worth it in the long run to get these issues addressed before proceeding. 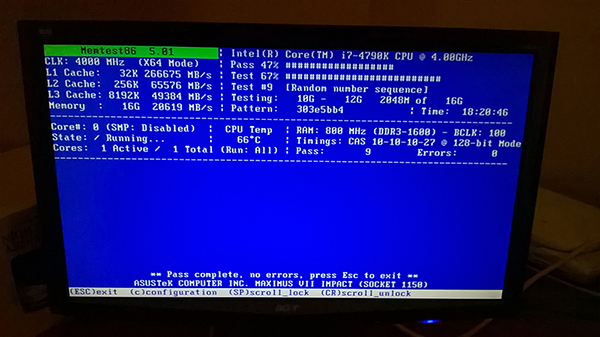 After the eighteenth hour and no errors, I called it. Now it just needs to be rebooted and the OS installed! Time for a beer!