After quite a bit of time and assembly, Vid Style 8 has been completed! The one is unique in the fact that its entirety is nothing other than 8-Bit and 16-Bit video game music. I personally think this is one of the best ones that has been created, if not just for the nostalgia factor.

For the album cover itself, I wanted to spoof an old NES cartridge box art. So I decided to use the old Capcom style ones from the very early NES
titles around the era of the original Mega Man and Ghosts ‘n Goblins. Laying that out was pretty easy, the title is a combination of the original Mega Man’s title screens, and Mega Man 7 to give it some stronger contrast.

The final dilemma was what to do for the central piece of artwork. Recalling the over-the-top piece for The Mega Collection, I wanted to do something similar even going as far as wanting to reuse the Gramophone as the central icon. However, I thought of something a bit more out there: having the NES, SNES, and Genesis controllers flying through space! Since a number (or all) of the NES box art was illustrated, I went ahead and stylize drew the artwork and used the Wacom to color and ink it in Illustrator to Photoshop. This went pretty swift with only one annoying issue of Illustrator not wanting to open the file once I saved it. Thanks to using CS4 at work, I fixed the dang file and continued on with coloring it in Photoshop. The original final layout had black lines, but that didn’t look quite right. I swapped them to colored lines and the art looked so much better.

I learned more about digital coloring and look forward to the next thing I work on with that!
Programs used were Photoshop CS2, and Illustrator CS2 (CS4 to fix the file). 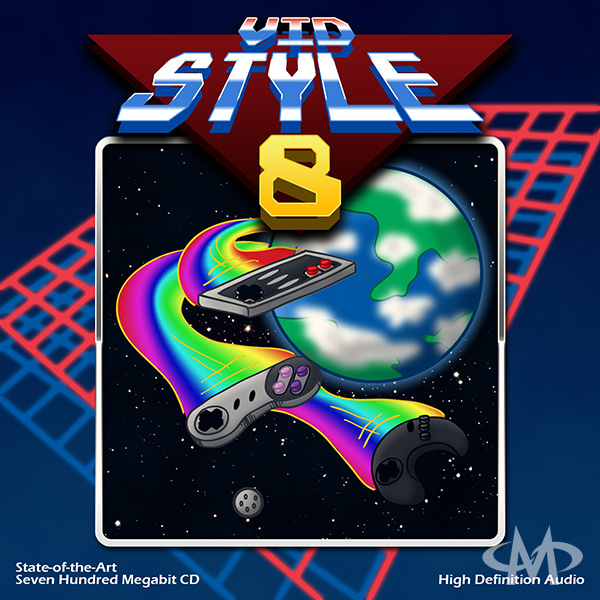